The Old & The New In The 2019 BullGuard Antivirus Edition

Back in 2017, BullGuard won the Gold Malware Protection Award. Such a distinction from AV-Comparatives, the reputable antivirus review independent organization, sure meant a lot. Fast forward two years and two antivirus editions later… It looks like its protection features are no longer so conclusive. So, you may be wondering: what is old and what is new in the 2019 version?

To kill the suspense, we must specify from the very beginning: independent lab tests for the BullGuard 2019 Edition showed different protection results.

Also, numerous voices across the web claim that ransomware protection is still far from its maximum potential. The main packages that we will review below clearly leave room for specific improvements. And these are findings at a glance, observations that we can make by comparison with its main competitors.

Even so, many would consider BullGuard an interesting antivirus. Talk about its highly configurable menus and options, all the way to a surprising gaming feature, known as Game Booster… There’s plenty to look at, from a bright-sided perspective. Coming up next in our antivirus review, we will go through each of its tools and utilities. Will you join us?

The Bullguard Antivirus Offer For 2019 – An overall look

Clearly stated on the official website, BullGuard’s commitment is to constant innovation. The 2019 release, however, doesn’t score too many revolutionary additions. In fact, the novelties rather consist of incremental improvements on previously-existing features.

There are three main packages to choose from, with minimum technical requirements: 1 GB of RAM, 850 MB of hard-drive space, and at least a Dial-up internet connection.

Speaking of which, the Premium Protection is the only option where one can benefit from extra licenses. The other two cover just one PC on a license, for one year, for an average industry price.

Now, between the three packages and the three types of operating systems, Windows offers are the most attractive.

Coming up next, we will review some of the most important functions included in the BullGuard 2019 Antivirus Edition.

Review Of The Basic Package

The BullGuard antivirus aims to offer protection against viruses and malware, but also ransomware and phishing attacks. For this reason, the Anti-Virus, Anti-Phishing, Anti-Malware and Anti-Ransomware are essentials of the basic package. Now, the 2019 Edition, in particular, is said to offer a next generation of malware protection.

They call it a triple layer of protection, but it is more like a constant evaluation process in three steps:

The BullGuard Sentry engine works with the Behavioral Detection function, one that was enhanced in this edition. As it gets daily updates, it is more capable of spotting and blocking the latest threats. Whatever issue it may find, it will also send real-time alerts.

From the main dashboard, within the Antivirus panel, users have a drop-down list with several types of scan: 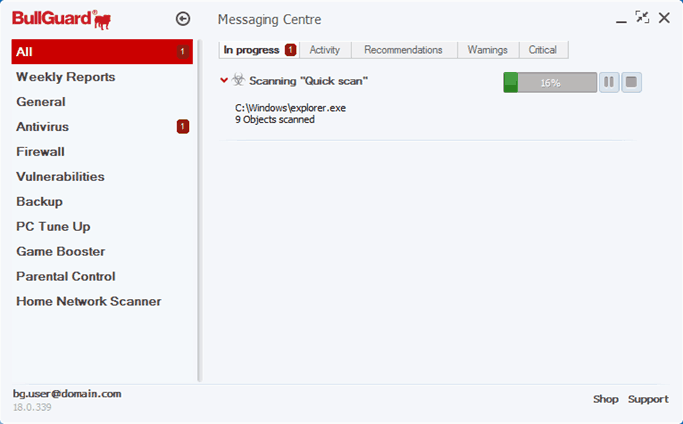 Going to the Settings menu, however, users also have the option to create Antivirus Profiles for custom scans. This option allows you to decide:

Creating custom scanning profiles for specific areas of interest is a major advantage. The antivirus can only review folders where you keep executable files, important documents, network drivers etc. Such specific, focused scanning will rule out areas with lots of data and folders that you’re sure are not at risk. Welcome, improved performances and a speed up evaluation process!

A Closer Look At The BullGuard Vulnerability Scanner

Any antivirus out there isn’t supposed to just sit around and wait for viruses to knock on the system’s door. It is also supposed to run preventive scanning processes. So, in an attempt to spot system vulnerabilities and suggest appropriate fixes, BullGuard has its own Vulnerability Scanner.

As mentioned, this isn’t a brand-new feature, but rather a redesigned one. From the its dedicated panel, users can see all the security problems at a glance. Necessary Windows security updates and Autorun settings requiring reconfiguration are all mentioned in there. But how does it get to those suggestions? What it scans and what it does, specifically?

A Short Intro To The Much-Coveted, NEW BullGuard Game Booster

So, the Game Booster may be the last feature from the list of the basic antivirus package. But it is certainly not the least and, judging by its role, it is a one of a kind tool. As the only feature truly new in the 2019 BullGuard offer, the technology behind it is still waiting to get its patent.

In a few words, the Game Booster monitors the device’s activity. Whenever it spots a game running, it tries to improve the system performance. And it does so by allocating more resources to that particular game. Needless to say, this is quite unusual for an antivirus.

Why a game-focused feature within an antivirus package, you wonder? Perhaps they wanted to bust the myth that an antivirus will slow down the device and decided to do the opposite. All in all, the game booster allows users to enjoy security without worrying at all about performances.

Following the entire above, the question you probably have in mind is perfectly entitled. To pay or not to pay for even more features? The answer is obvious, though not necessarily specific: it depends on your needs.

As seen in the beginning of this review, BullGuard considers its second package, Internet Security, to provide the best value for the money. In addition to the eight basic functions, it raises the stakes in four other directions…

Before hoping for a proprietary firewall, hold your horses. The BullGuard firewall protection is actually a shortcut to the operating system’s built-in firewall. So, if you check this option from the antivirus dashboard, you will see the standard list of installed software, with basic Allow/Block options. One button will take you to the Advanced Security panel of the Windows Firewall. And, if necessary, you can limit connection ports or look into other available (and limited) options from there.

In terms of cloud backup integration, the options are, again, pretty straightforward. This utility supports some of the most popular cloud storage providers. Think of Google Drive, OneDrive, and, of course, Dropbox. Additionally, it supports external storage devices (USBs or hard drives), network storage devices, or extra internal hard drives.

The backup can be initiated automatically, following a previously set schedule, or on demand, with manual initiation. And users can create multiple profiles, specifying, for each one, which files they want to be copied to the cloud.

All parents need some sort of parental control tool on the devices used by their children. But the type of parental control provided by BullGuard is not necessarily the most advanced. It works hand in hand with web filtering and it comes with common sense feature:

The PC Tune Up is supposed to help the device run smoother. It does so by cleaning and optimizing the performances of the operating system. Among standard processes, it will:

All these actions, however, result after a scan. Once the scan initiated, it returns a report with files to inspect. You can choose to let it free up all the space that it suggests or manually interfere and remove certain files from being deleted. Moreover, you can save a cleanup process for future reference. That way, if it will bump into similar files in the future, it will know what to do with it without waiting for your approval.

Looking for protection on more than one device? Or you simply want more protection features? Considering the BullGuard 2019 Premium package is the next step. What you’ll get, on top of everything discussed in this review, are the Home Network Scanner and the Identity Protection.

The price tag difference between the Internet Security and the Premium Protection packages may or may not be justified. At least if you look at the following two extra features that BullGuard tucks inside the Premium offer. But one undeniable benefit is that this offer includes licenses for more than one device. Now, back to the specific tools… 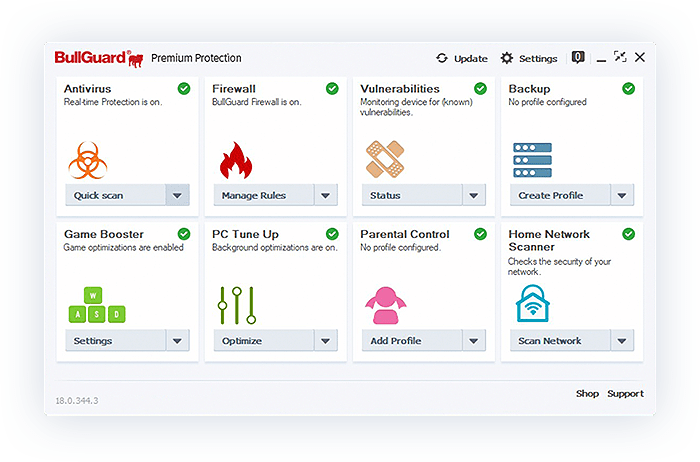 The name is more than obvious, which means that this module will permanently scan the devices connected to the local network. As soon as a new device joins the network, it pushes a popup notification. In terms of customization, it allows users to set custom names for each device, to see MAC and IP addresses for each device, and to associate each device with a specific category.

It has the benefit that it also accesses whatever devices are connected to the network, not just PCs, tablets or smartphones. By whatever, we mean thermostats or baby monitors and anything else. Plus, any time a new device connects to your network, it automatically detects it and runs a scan.

This one doesn’t scan the device, it scans the internet, searching for your personal details. Do you have usernames, phone numbers, email addresses, credit card details or passwords associated with your BullGuard account? If it finds any of it posted online, it will send you an alert and advice you on how to proceed. You can tweak the identity protection settings from your online BullGuard account, by clicking on this feature within the antivirus dashboard.

Accessibility & Performances – Is BullGuard Right For You?

If we were to choose just one word that would describe the BullGuard interface, it would be – cluttered. As opposed to Avast, Avira or, for instance, Bitdefender, an antivirus that we have recently received… This one feels like it puts too much onto the dashboard.

The classic design with a side-column menu and a large chunk of the window dedicated to current status and quick options? Nowhere to be found… 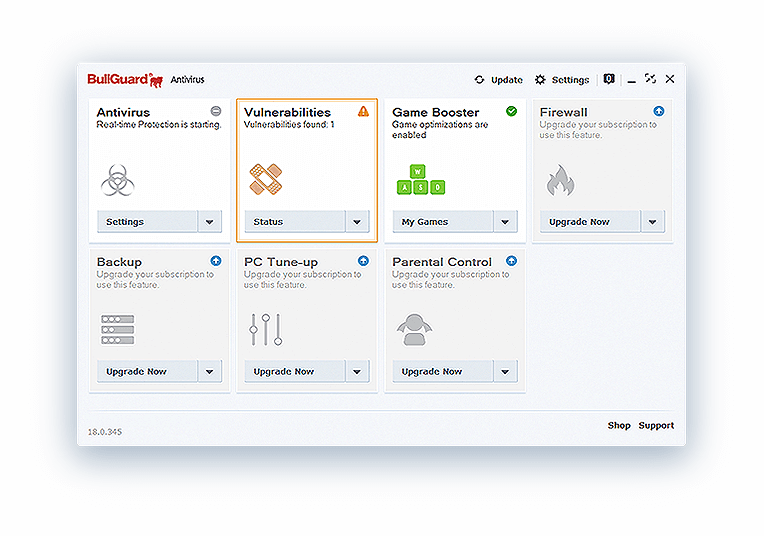 Long story short, this is not the most user-friendly interface one can get. At the same time, it doesn’t take rocket science to get the grasp of it, either. Just have a little patience to go through the menus.

Now, as far as performances are concerned…The Game Booster tool was proved, in practice, to significantly improve the system performances. And the option to customize Antivirus Scans for certain areas of interest? It clearly improves the effectiveness of the scanning while reducing the duration.

Effectiveness, however, as shown by different, independent laboratory websites, is somewhere a little above average. The lack of a dedicated anti-ransomware module is also considered a shortage of the 2019 BullGuard Edition.

Sure, the basic antivirus package claims to offer this kind of support. Yet users cannot particularly indicate what folders must be protected against ransomware attacks. Which means that, even though some kind of ransomware protection is available, it still revolves around the average…

On the plus side, we’ve seen that the antivirus is available for a moderate price tag. The Game Booster is not only a unique feature among other antiviruses, but also proved to be very effective. The wide range of scanning options is a welcomed feature. And so is the opportunity of scanning the entire home network, with every single device connected to it.

The drawbacks would sum up to the above-mentioned cluttered interface. And to the fact that a single license covers a single PC. Adding the somewhat contradictory recent lab tests, the conclusions of our BullGuard antivirus review will revolve around the label of “average”.

To be fully honest, BullGuard is somewhere above the average. While it isn’t a bad antivirus in itself, it has the disadvantage that many of its competitors are offering more features. Even for the features that are common, other antiviruses might provide higher results.

So, BullGuard may not be the sharpest tool in the box. Still, it’s a tool that is well worth being kept in the box and taken into account. 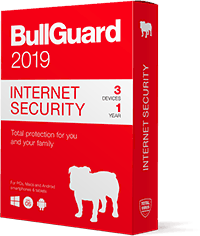 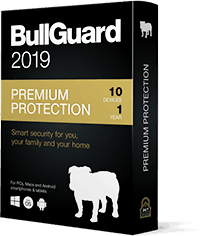