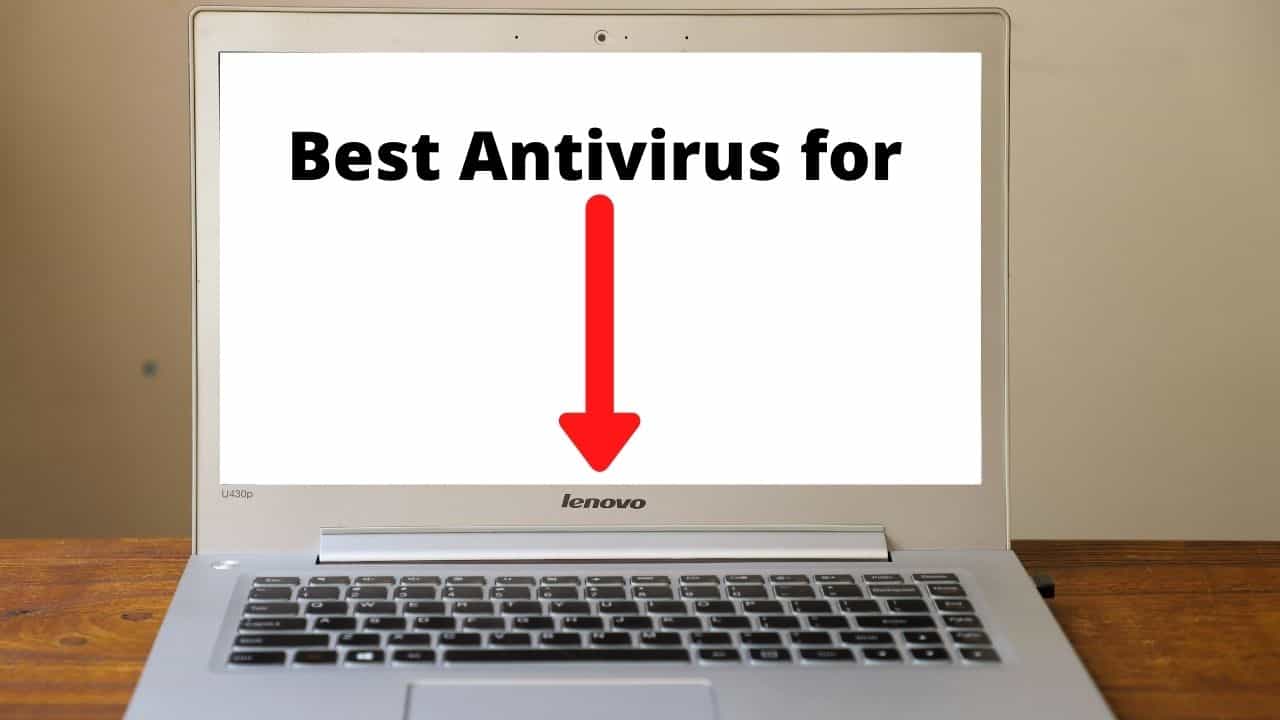 Lenovo is not the new kid on the block when it comes to engineering solid laptops, notebook computers, IdeaPads, and more. Investing in the brand’s laptop is usually an excellent purchase. However, you need to take steps to safeguard your investment by getting a good antivirus.

Fortunately, finding the best antivirus for Lenovo laptops is not too difficult since the system runs Windows OS. There are a handful of excellent third-party malware protection software and antivirus utilities that can provide adequate security.

Here’s a quick overview of some of the most reliable options for protecting your Lenovo laptop as well as safeguarding your personal data, especially if you plan to spend more time online.

Your new Lenovo laptop comes preloaded with Windows 10. That means you already have the Microsoft Defender Antivirus on your computer. For many people, this level of protection is more than enough, as long as they are careful with suspicious emails and links.

Granted, Microsoft Defender (previously Windows Defender) is a free internet security program but it does a pretty decent job of protecting your laptop. The software runs by default if you haven’t installed a third-party antivirus, so there is little or nothing you need to do once you buy a new Lenovo laptop. Simply turn on your computer and let Windows do its thing.

Thankfully, Microsoft sends updates quite regularly, allowing users to keep the program running smoothly. Note that if you install a third-party antivirus, Windows 10 will auto-disable Microsoft Defender. The operating system will also turn the antivirus back on once you uninstall the third-party utility.

While the program is free, corporate users can access the paid version (Windows Defender Advanced Threat Protection) for a fee.

But here’s the thing. If you keep the free version up to date, steer clear of suspicious links, and generally practice safe computing, especially when surfing the internet, Microsoft Defender might just be the best antivirus for your Lenovo laptop.

If you like your Lenovo laptop and if you don’t want to make it slow by installing the first antivirus you find consider taking a look at Bullguard. One of it’s key features is performance. With this antivirus, you don’t have to worry about your laptop being choked to death by heavy security software.

This lightweight and performant antivirus doesn’t lack protection abilities. In independent lab tests, it scored really high both in protection and performance which makes this one of my top choices.

If you want to use your Lenovo laptop for gaming good news. Bullguard comes with a dedicated game booster that will improve your gaming experience. It will isolate all the running programs on only one core of your CPU and use the rest of the CPU only for Gaming.

Worried about popups while gaming? That is annoying. I remember a few years ago I was trying to play CS:GO and whenever I was entering the game I had a popup from Windows telling me that my screen resolution has changed. Because of that popup, the game got minimized and I was so annoyed.

Bullguard takes care of this issue. When you are opening any game, the game booster will activate itself and will silence all popups and interruptions that can occur. On top of that, it will monitor your gaming and will save the best settings for each game.

Not a gamer? Well, Bullguard is still a good choice. It has advanced virus and malware detection that will prevent your PC of getting infected while browsing the internet, watching movies or Working.

Also, it comes with a secure browser. This internet gateway will create a barrier between your computer and other external users when you are shopping online, take care of bills or manage your back account. 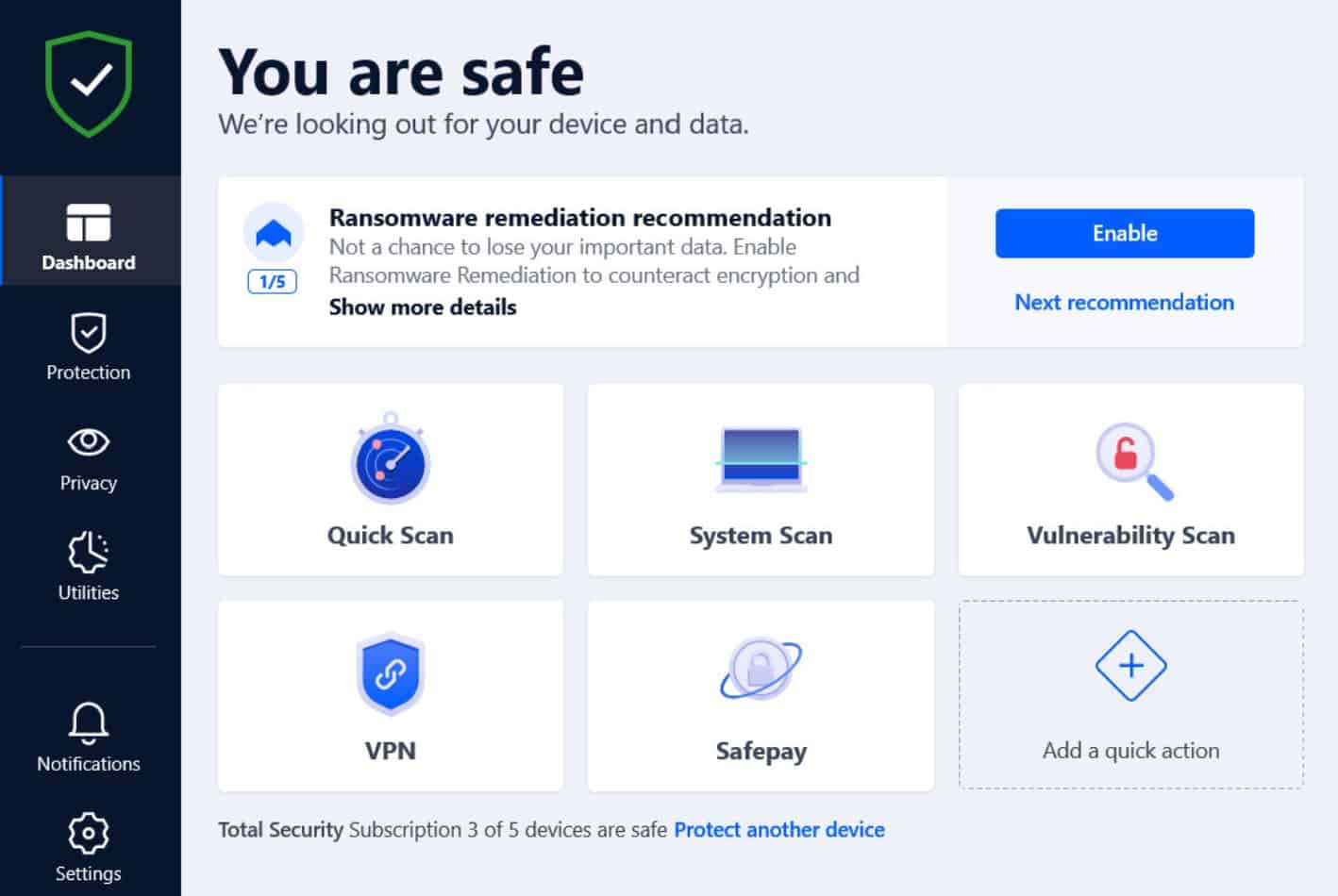 If you don’t want to spend money on getting antivirus for your Lenovo laptop but prefer something free besides Microsoft Defender. You may want to check out the free version of Bitdefender Antivirus.

Unlike some antivirus programs, this option is incredibly powerful with tons of free security features, yet it is surprisingly light, super-fast, and won’t slow down your laptop. Plus, it is compatible with Windows 10, the operating system in Lenovo laptops.

Installing and setting up Bitdefender is easy-breezy but that’s not the best part. You get to enjoy real-time monitoring and protection against ransomware, spyware, malware, and viruses with the free edition of the software.

If you like the free Bitdefender but want to beef up the security on your laptop, you can sign up for any of the Bitdefender Total Security plans with prices starting at $36 for a 1-year subscription covering at least three devices. 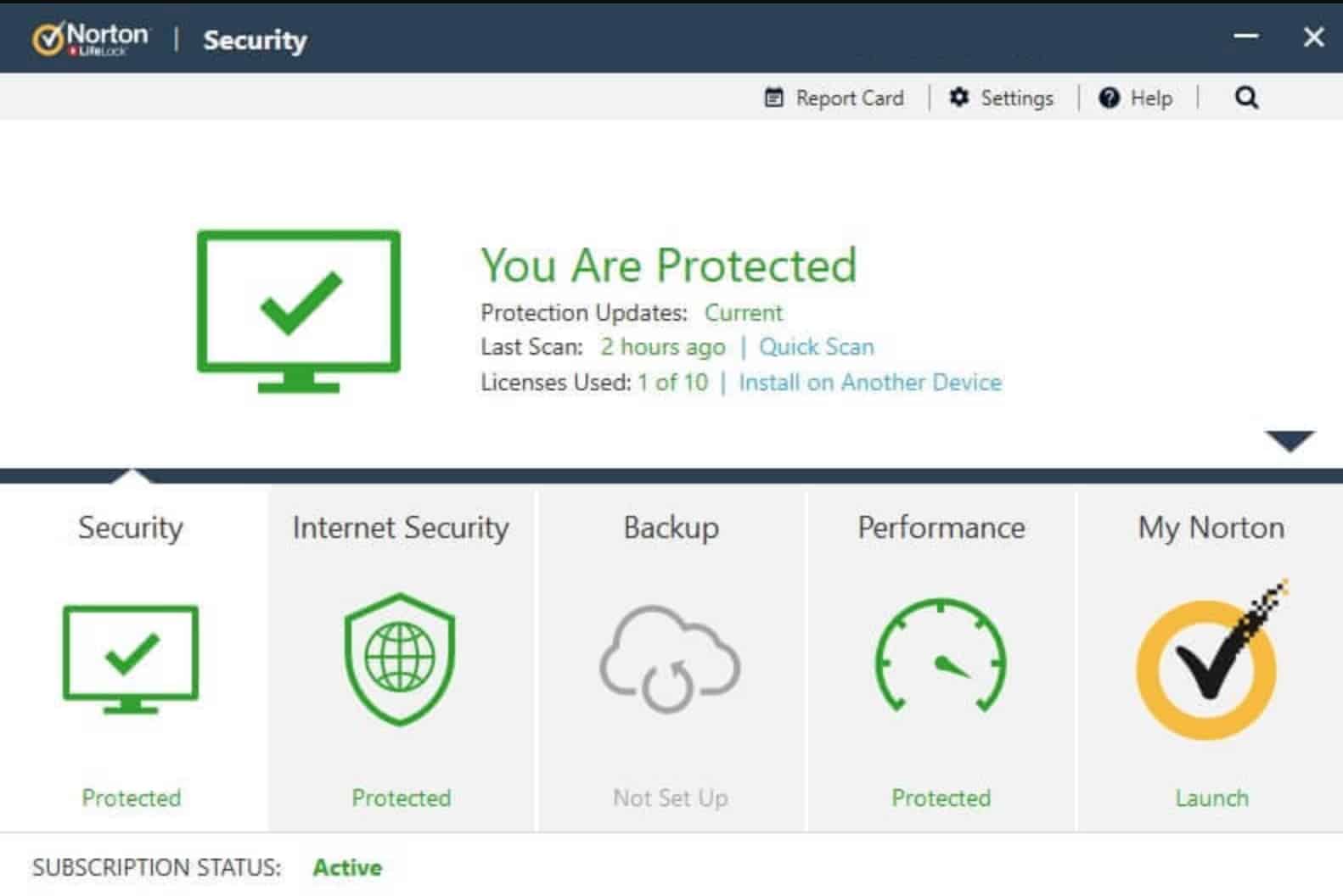 If you are more comfortable with third-party paid anti-viruses, you may as well get a trusted virus-protection program.

Norton 360 with LifeLock (formerly called Norton Security) has been subjected to a handful of independent third-party lab tests (think SE Labs, AV-Comparatives, and AV-Test). The scores are unanimously high with Norton bagging several awards over the years, and earning the software a rightful spot on this list of the best antivirus for Lenovo laptop.

Norton 360 with LifeLock is up for grabs at a $150 yearly subscription, but you can get access for only $99.48 for the first year. Your purchase offers virus protection for five different devices, including PCs, Macs, iPads, iPhone, and Android devices.

In addition to all the security tools available with the program, you also get 100GB cloud backup plus LifeLock identity theft protection. With all these benefits, it is easy to see why Norton 360 with LifeLock is a more appealing proposition for many Lenovo users. 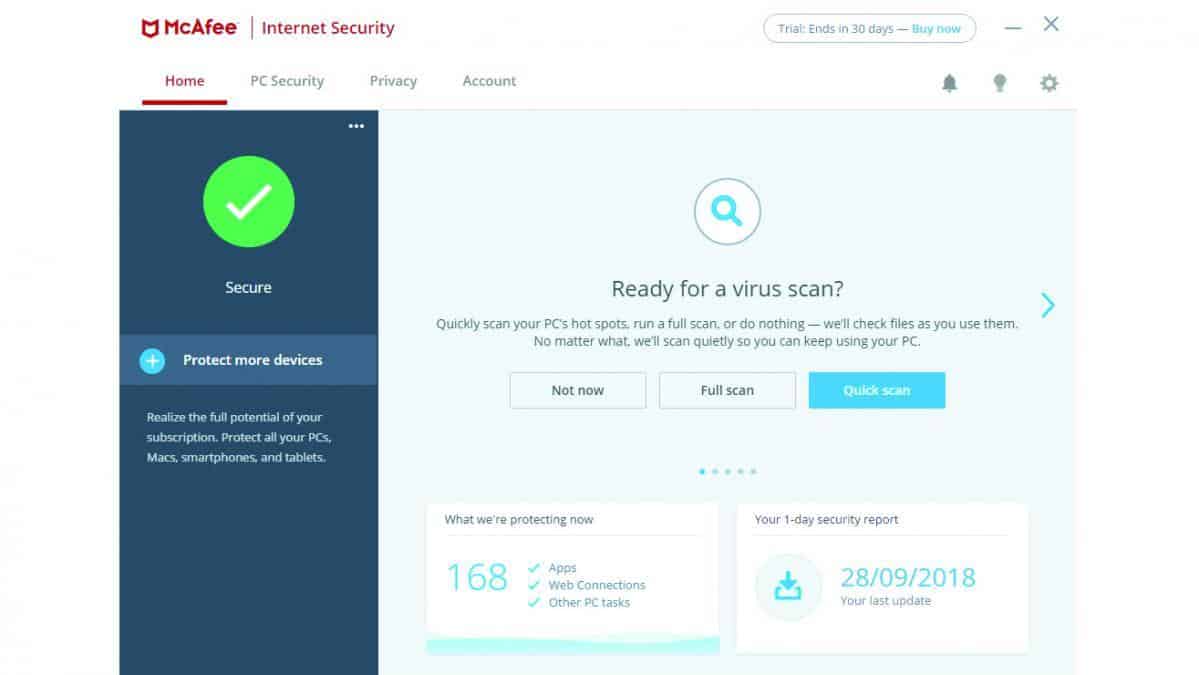 It’s difficult to think of antivirus programs that have been around since forever without mentioning McAfee.

But McAfee is not included on this list of the best antivirus for Lenovo laptops merely because of how long it has been on the market. Instead, it is one modern computer security program that has continued to dole out solid updates nearly every quarter since inception.

McAfee scores very high for overall performance and protection over the years and even in recent ratings by independent labs.

You can confidently work online on your Lenovo laptop with a McAfee Total Protection subscription. The payment plans include a 1-year plan covering five devices for $40 or a 2-year plan offering protection for ten devices for $70. 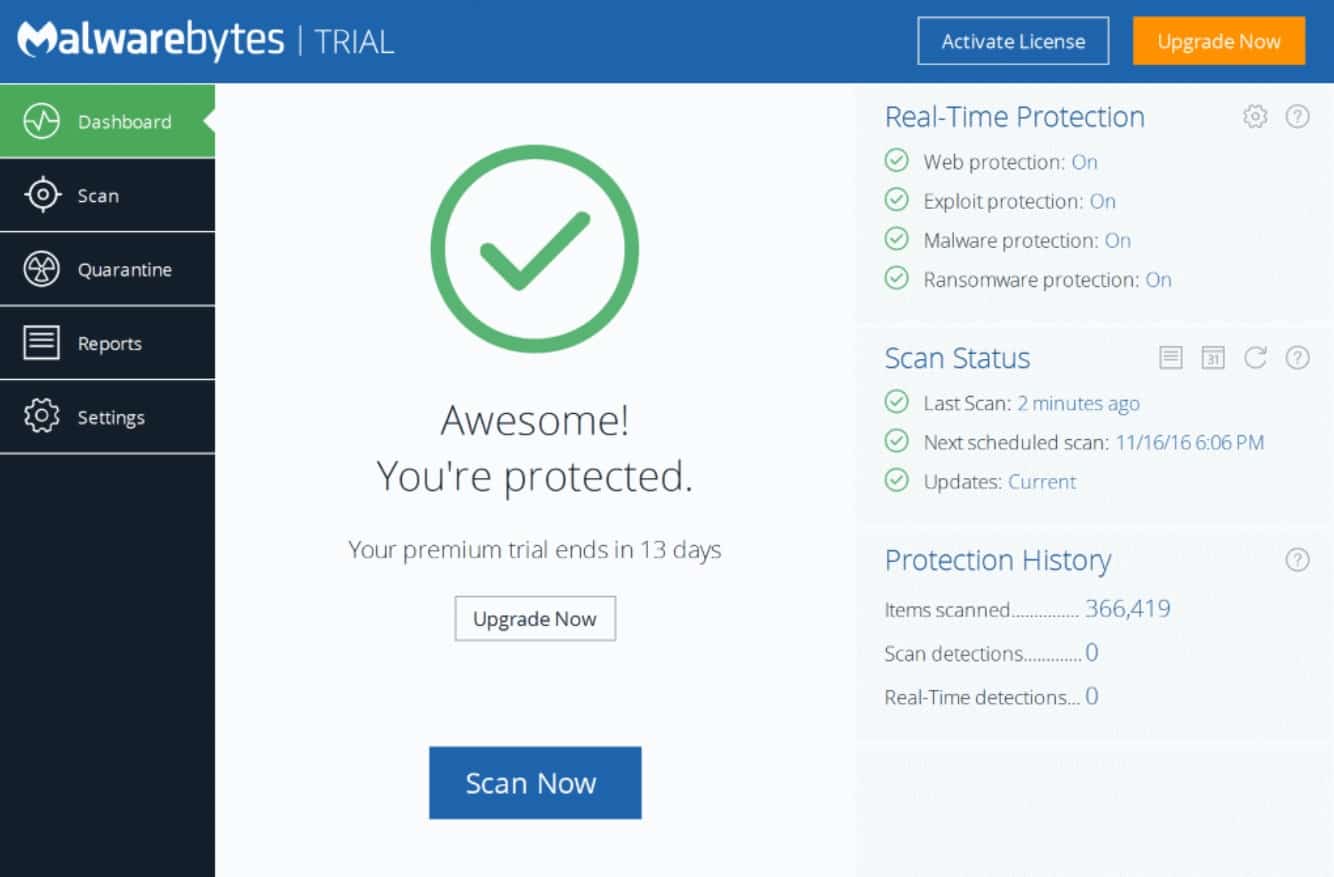 Classic antivirus programs are great, but when it comes to total protection against malicious online activities and malware, you are going to need a host of other digital weapons, guards, and “disinfectants” in your online security arsenal.

That’s where you need an on-demand malware removal utility, such as Malwarebytes. It is not only a top-choice against malware and viruses, but it is a dependable ally when it comes to fishing out and neutralizing threats.

The program offers both personal and corporate pricing plans, with the individual options starting at $3.33 for one device and $8.33 for five devices, all billed annually. Businesses can protect as few as nine devices or more than 100 devices at different billing plans.

You can get Malwarebytes for a 14-day free trial period. Make sure to subscribe to a paid version before the trial period expires, or else the program will revert to a free version, and you will lose the full real-time protection. The free edition will only detect and clean fewer threats when you run a scan.

It is rather difficult to narrow down the best antivirus for Lenovo laptops to just a single program. When all is said and done, personal preference plays a huge part in your final decision. Hopefully, this list will narrow your search to help you to pick an antivirus program that works great for you.

Personally, I use Bullguard and I am pretty happy with it. You can try almost all antivirus software for free. Most of them also have a 30-day money-back guarantee so if you are not happy you can ask for a refund.