Can Malwarebytes replace the antivirus? 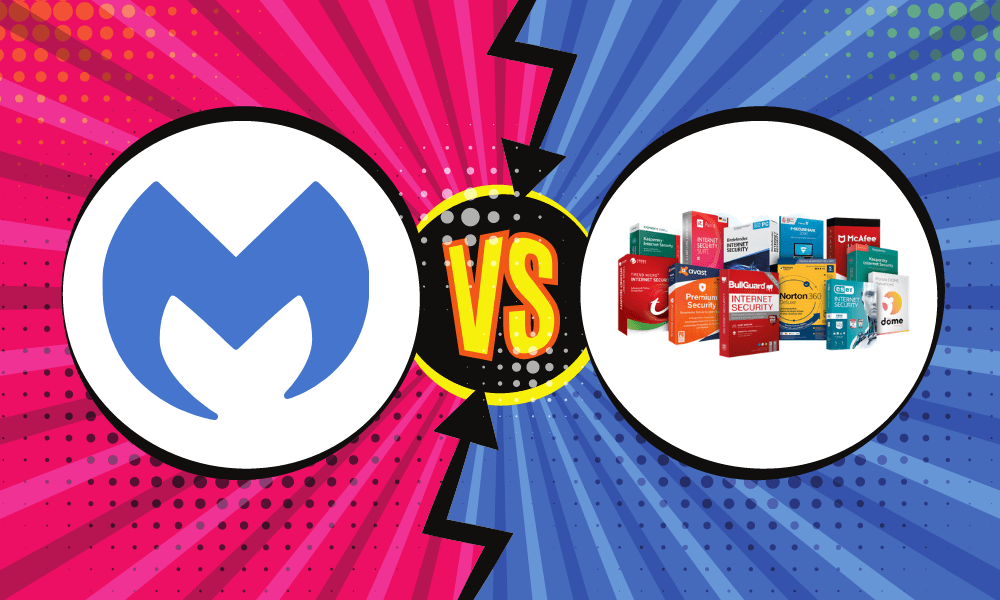 Here’s a little riddle for you: if a virus is a malware, but malware isn’t always a virus, should you still use antivirus software AND the famous premium version of Malwarebytes? While it may be tempting to deal with less and take less money out of your pocket, we’ll have to look at the facts first.

If you’ve been around for a while, you know I usually come up with two answers for each question. We’ve covered the short answer, but now, you might want to grab a cup of coffee and keep reading.

I have a few more things to tell you that you probably didn’t know about Malwarebytes, which should help you make a smart choice.

What is the difference between Malwarebytes and Antivirus products?

Just like the name suggests, Malwarebytes is anti-malware software. It relies on machine learning and artificial intelligence algorithms. And it works to detect various types of malicious software, including malware that hasn’t been seen before.

From trojans, worms, and virus droppers to dialers, spyware, and rootkits or rogue applications, many of these common online threats fall in the yard of Malwarebytes.

As you probably know, antivirus software is not that great at detecting zero-day malware or malware in the wild. Some of the top-tier antivirus software do rely on Machine Learning and Artificial Intelligence algorithms, just like Malwarebytes does. Yet test results show different capabilities for the two of them.

In some cases, even if your antivirus software will detect malware, it may not be able to remove it from the device altogether. That’s where Malwarebytes can, once again, make the difference by helping you to get rid of the infection completely.

For instance, if it’s a file infector, your antivirus software could do a better job spotting it. If it’s a crazy new malware version, Malwarebytes could save the day for you.

The difference comes down to the way they are built and the signs they are looking for.

Antivirus software aims for simple protection and focuses on a reactive defense – it requires updates of the virus definition database and will instead jump to quarantine and clean a threat once it notices that it runs on your device.

Malwarebytes is more of the proactive type that uses AI to detect and remove threats before they get to run on your device.

So far, I showed you the main differences between these two security options. But I should also add that, even though Malwarebytes is a malware solution, it isn’t a historical solution! That’s right; it deliberately ignores older malware signatures and focuses on 0-Day malware.

Long story short, Malwarebytes demands that samples submitted for detection to be from the past three months, nothing older than that.

Should I use Malwarebytes if I have Premium Antivirus?

These days, malware isn’t what it used to be. In its early days (or years, so to speak), malware was rather focused on being annoying and ads-intrusive.

For now, however, it’s getting more and more sophisticated, deliberately looking to stay unnoticed and aiming to make changes within the OS.

Traditional antivirus software is not that effective in detecting these OS changes, but Malwarebytes seems to do a great job at it.

Of course, with premium antivirus software, you get more enhanced detection mechanisms, but practice shows that this may still not be enough. Internet forums are filled with threads where Malwarebytes ends up being the solution for cleaning up infected systems.

Therefore, using this anti-malware solution is a must, whereas your antivirus choice remains debatable. Because if, for instance, you’re running on Windows, Malwarebytes can make a good match with Windows Defender without you having to pay for a top-tier, premium antivirus package.

Do you need both anti-malware and antivirus?

Yes, you need both anti-malware and antivirus software if you want the highest protection level. While “virus” may generically refer to various malware, there are still significant differences between the two.

Viruses can self-replicate, and once they infect a device, they will autonomously spread. On the other hand, malware defines a broader concept, and despite including exploit code, it doesn’t self-replicate. So, there are different types of viruses and many more types of malware.

To recap, you want to use anti-malware software for infections with non-viral malware, especially for newer security threats that can be detected before the infection takes place.

As an exception, anti-malware software can only prevent a virus infection when dealing with worms or virus droppers. A virus dropper is a malware file that only acts as an infection vector – without being infected with the virus it carries, it will drop the virus and trigger a viral infection.

What Antivirus works best with Malwarebytes?

If you ask me – but even if you don’t, I’ll tell you anyway – you have a few paid and free options to look at. There are different considerations to take into account for each one, but here they are:

The Plus version of Bitdefender is one of the good antivirus options currently on the market that work well with Malwarebytes premium. This antivirus can also handle advanced malware, ransomware included, and comes with a VPN, just like Malwarebytes.

So, using this combo will give you two strong security layers. Not just any options, but two of the best!

The Premium version of Avast is breathing in the neck of the Bitdefender Plus – Malwarebytes Premium combo. Avast is one of the few antivirus options out there that don’t go crazy when detecting another antivirus already installed on a device.

With the Avast Premium version, you are, again, getting a VPN, but also vulnerability scanners, password management, and even a game mode. It is a just as viable – and more affordable, if I may add – option as Bitdefender Plus, and it works with Malwarebytes without issues.

Last but not least, there’s the already mentioned Windows Defender. It’s free with Windows 10, which makes it pretty much impossible to ignore. And it claims to give you real-time monitoring.

Disclaimer – it is not nearly as an excellent antivirus as the Bitdefender or Avast versions. Moreover, it ties phishing and malicious website vulnerabilities detection to using the Microsoft Edge browser.

But if you’re quite conscious (or picky, whatever you prefer) about the links you click on and the websites you’re visiting, its flaws may not be such big problems. Especially when money is tight, I’m just saying that Malwarebytes plus Windows Defender isn’t the worst mix you can get!

Can Malwarebytes replace the antivirus? The conclusion:

No security solution – not even the premium ones – can truly keep up with the growing threats from the World Wide Web (or Wild Wide Web). And so, anti-malware solutions like Malwarebytes can only add welcomed extra protection in the never-ending fight against advanced malware.

Why choose only one when you can have both, and they can work together without conflicts?