One Of The Simplest Antivirus Options Out There

So, you haven’t heard of the Intrusta antivirus so far? No need to feel bad about it. After all, the company has only been on the market since January 2018. But as new as it is, it certainly comes with some bold claims. Claims that determined us to start the research for the following Intrusta antivirus review.

A newcomer in the landscape of online security, the company brags about serving over 500 million users already. At the same time, the About Us section of their website will leave you wondering. Not only that they haven’t existed as a company before January 2018… But the Intrusta App has been officially launched in September 2018.

Are they really covering such a large number of devices? Is the company legit? How about their antivirus? Is it really all about “powerfully simple online security”, as their tagline suggests? Let’s find out, together. 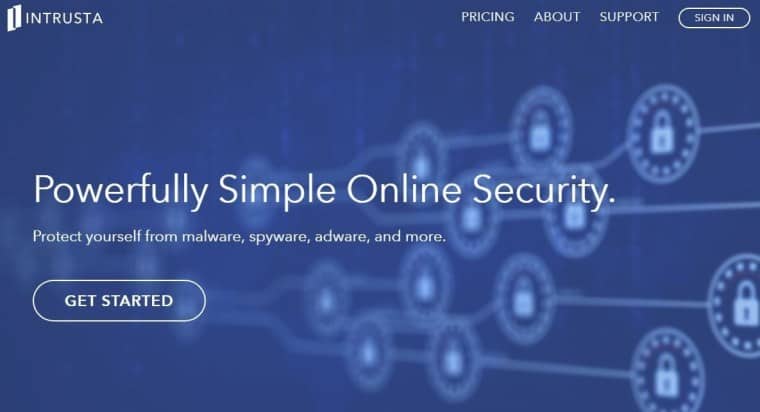 A short intro about the company

Despite the scarce information, Intrusta is a legit company. It defines itself as a unified digital threat protection platform. And it is actually a small part of the iSubscribed family, a holding company specialized in digital security.

The details are hard to spot, yet we found it briefly mentioned within a press release from January 2019. Announcing the new acquisition of Intersections Inc, by iSubscribed and its Partners, the press release also mentioned the Intrusta brand. As it turns out, they are planning on expanding their portfolio with enterprise solutions.

For now, the Intrusta antivirus rather caters to home users. And clearly stated on their official website, lies the secret to their rapid expansion: they haven’t built the antivirus engine from scratch. They mentioned working with a trusted antivirus developer and using a product that had been on the market for years. However, no details about what antivirus engine that may be…

In other words, Intrusta is selling an antivirus and their contribution is limited to how the app looks and feels. They said that they “wanted the best antivirus solution with a simple interface and someone to speak to when we needed help. We couldn’t find it, so we built it”. By “it”, they mean the interface, not the antivirus solution…

To put it simple, Intrusta is an antivirus application. In fact, it is one of the simplest antivirus options we have reviewed so far. All it has is a three-mode virus scanner, but it promises to offer, aside from anti-virus capabilities:

Intrusta is currently available for Windows 7, 8, 10 and Mac OS 10.12 or later. It does not support Chrome OS or Chromebooks. And it has an Android-compatible version currently under development.

For smooth operation, it requires a minimum of 300MB of free disk space and 1GB of RAM. Since the product is limited in offerings, the differences between the available packages are all about the number of licenses.

In other words, one can choose to buy the Intrusta antivirus for 1 device, for 3 devices (they call it the most popular offer), or for 5 devices.

There is a certain discount offered at the initial registration, followed by a higher price tag for the annual subscription renewal. The prices are clear, from the very beginning, but they do have a mention between brackets – “Plus applicable tax”, which isn’t really clear what it means…

Intrusta kept its word and wrapped the antivirus engine in a very simple and intuitive interface. The app is easy to install and the official website offers step-by-step instructions, with pictures. Even though the steps are relatively the same, they split their tutorials for Windows and Mac devices. And within each tutorial, there are separate mentions for different internet browsers that could be used during the installation.

Once installed, the antivirus will be easily accessible from its dedicated icon, at the bottom right corner of the screen, in the notification bar. Right-click on it and a context menu will launch, with the following entries:

By selecting the last option, you will get to the main dashboard, from where you can select a type of scan. 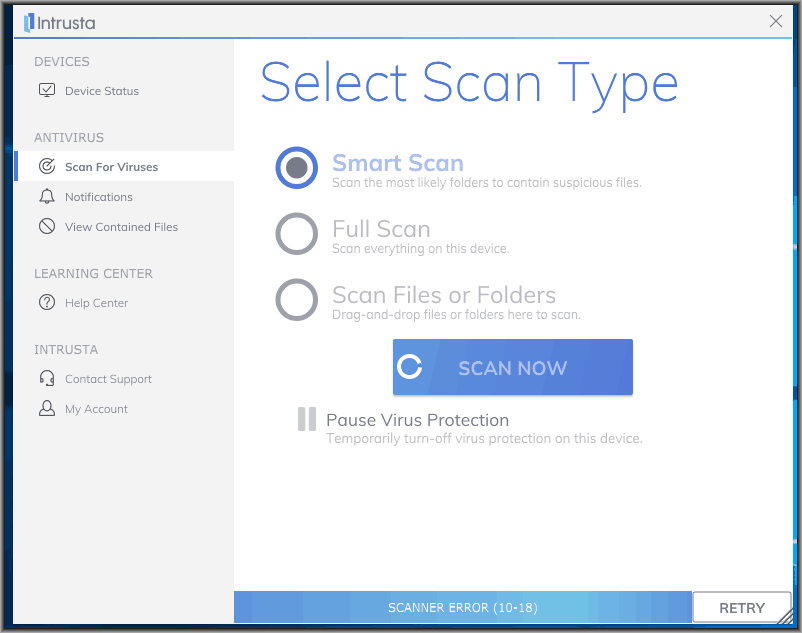 There are three options in there:

What happens after the scanning?

Regardless of what type of scan you select, the final result will be a report of the files with issues. In case it finds any, by default, the antivirus should help you get rid of the infected files automatically. It usually moves the file(s) to quarantine and keeps it there for 30 days. Hit the Done button and you can forget about the quarantined files. 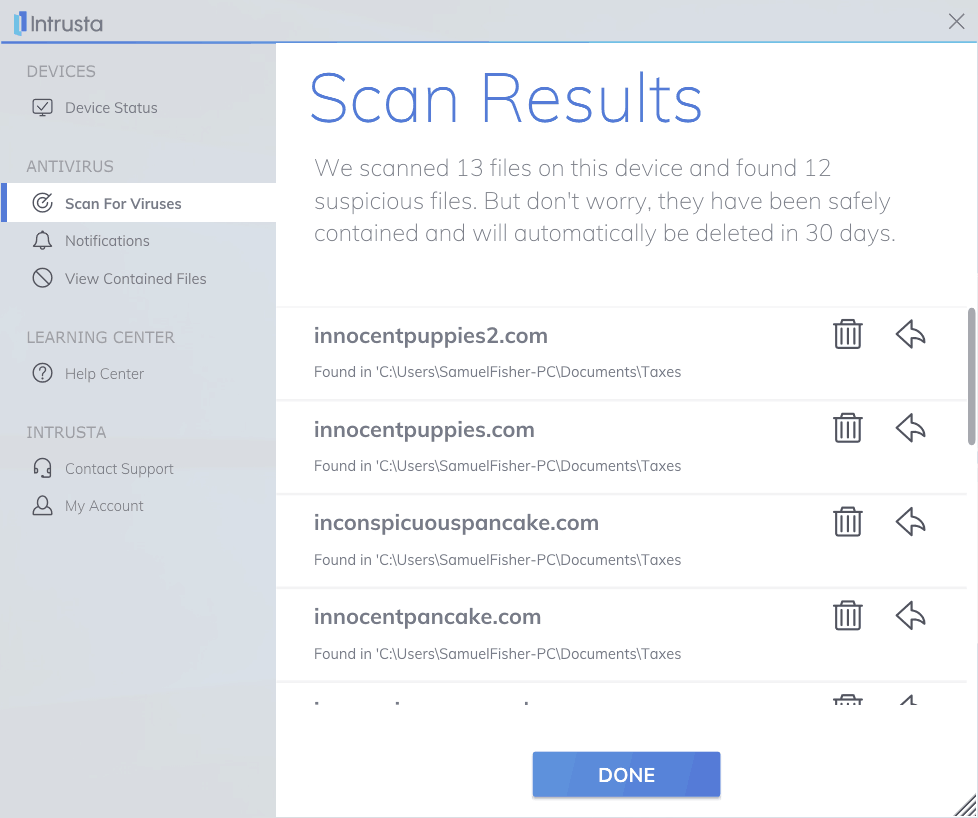 In case you decide, during those 30 days, or right then and there, that you need a particular file, you can restore it. Or, just as easily, you can decide not to wait for 30 days and delete the infected file right away.

As long as your device is turned on, Intrusta will search for updates automatically, at every 4 hours. Aside from this invisible process, it is also scheduled to scan the device every day at 3AM, provided that it remains turned on.

You don’t really wish to follow their recommendation and keep the PC on overnight? Using one of the three scanning methods from above, whenever you want, is just as effective. Basically, you can choose between automatic and on demand scan. Between full scan and partial scan.

Now, within the Intrusta app, aside from the scanning dashboard, users will also have access to:

What’s with that Game Mode feature?

For an antivirus with so little configuration options, every other feature except for the Scan options will easily stand out. This is the case for the Game Mode feature. If you’ve seen it in the menus, you are probably thinking of BullGuard’s Game Booster gaming feature. But as disappointing as it is, the two of them have nothing in common.

The Game Mode allows users to temporarily suspend the activity of the Intrusta antivirus. 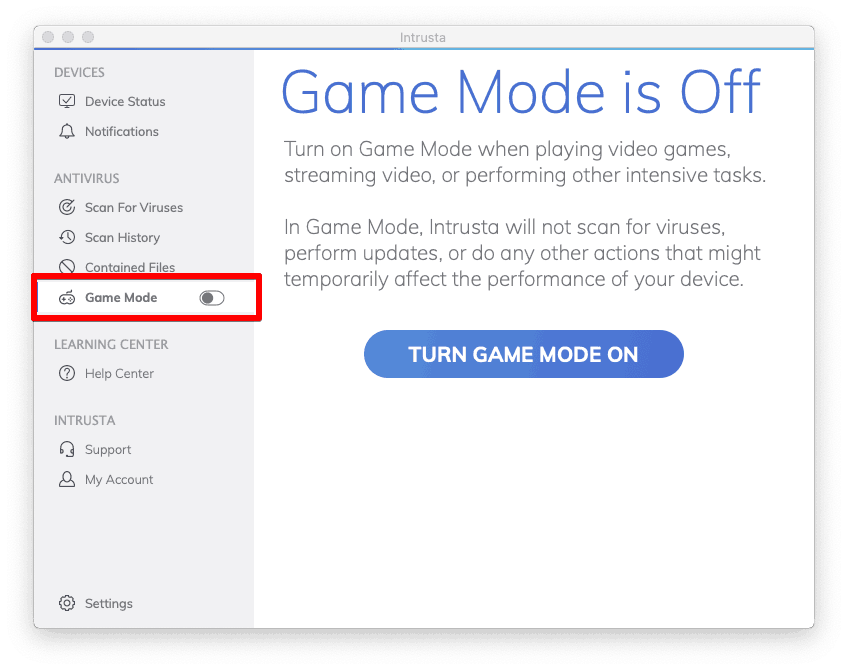 By activating it, you will free some of the computer’s resources, resources that were otherwise allocated to the antivirus. So no, it’s not a feature that once activated will work miracles on your system. It is actually a fancy way of saying that you have turned off the antivirus so it won’t eat up your resources.

The obvious merit of this built-in cancellation option is that virus protection will automatically resume after 12 hours. That way, even though you must activate it manually, you don’t need to also deactivate it manually. In other words, you won’t risk forgetting to reactivate the antivirus, it will do it by itself.

The Game Mode is useful not only when playing video games. Consider it when streaming videos or running any other tasks that take up lots of resources. Just bear in mind that for the next 12 hours after you turn it on, the antivirus will not scan for viruses. And it will not perform any updates either!

Pondering the pros and cons

Since it is such a new presence on the market, the company is often regarded with a serious dose of skepticism. We were also skeptical about it, in the beginning of our Intrusta antivirus review. And the fact that it hasn’t been independently benchmarked so far doesn’t help much either.

Want to learn more about it and go directly to the source, on the official website? You might be a bit disappointed. The platform itself doesn’t abound in informative resources. It does have an educational section, that they call light reading for beginners. But in there, you will learn about different types of online threats and access a technical glossary.

On the plus side, it is a simple antivirus with simple menus…

To draw the line on our Intrusta antivirus review…

If we add, to all the pros, the fact that over 500 million devices have tested it, the conclusion of our review is obvious. The Intrusta antivirus looks like it is really worth the money and the effort of getting to know it and enjoying its protection.

In any case, the company is aggressively promoting its products and their development plans are quite ambitious. So, without a doubt, Intrusta is a name that will stick around. For now, it has the merit of being particularly user friendly and customer oriented!