Yet Another Irresistible Antivirus In Its Free Package

Avast might have lost the chance of winning the Product of the Year award in 2019. But as you might recall, it certainly did it in 2018. And as it turns out, things haven’t changed much and certainly not in the wrong direction since then. So, their antivirus solutions are still a top choice.

If you’ve been around for a while, you must have seen that we recently reviewed Avira, a security service provider that puts great effort into its free antivirus. Since Avast is just as popular when it comes to sharing essential security for free… We wanted to review their 2019 packages and pricing tiers.

What’s left after analyzing the Avast antivirus in terms of security features and pricing? Follow us on this thorough analysis and see for yourself. The conclusions might be a bit surprising, especially when it comes to the top-tier packages and their value for the money…

The Avast offers at a glance

There are 4 different Avast packages you can choose from. One of them is available for free, the others not so much: Free Antivirus, Internet Security, Premier, and Ultimate. If we are to sum up…

Now, as perfect as the free version might look, it is certainly not the best you can get. If you want more, you will have to pay and this will unlock for you a couple of very important protection tools.

As a part of the Internet Security package… Aside from the firewall and the Ransomware Shield above mentioned, there is also an anti-spam tool and a Real Site option that you can activate for phishing protection. The Sandbox mode is another welcomed addition.

The two other paid versions, significantly more expensive, are packed with features that you might like to have but not necessarily like to pay for. The data shredder and the disk cleanup, the VPN and the premium password manager are all useful only to some extent. The debate stems from the fact that you’ll find these options from third-party sellers at comparable quality and for significantly lower fees… 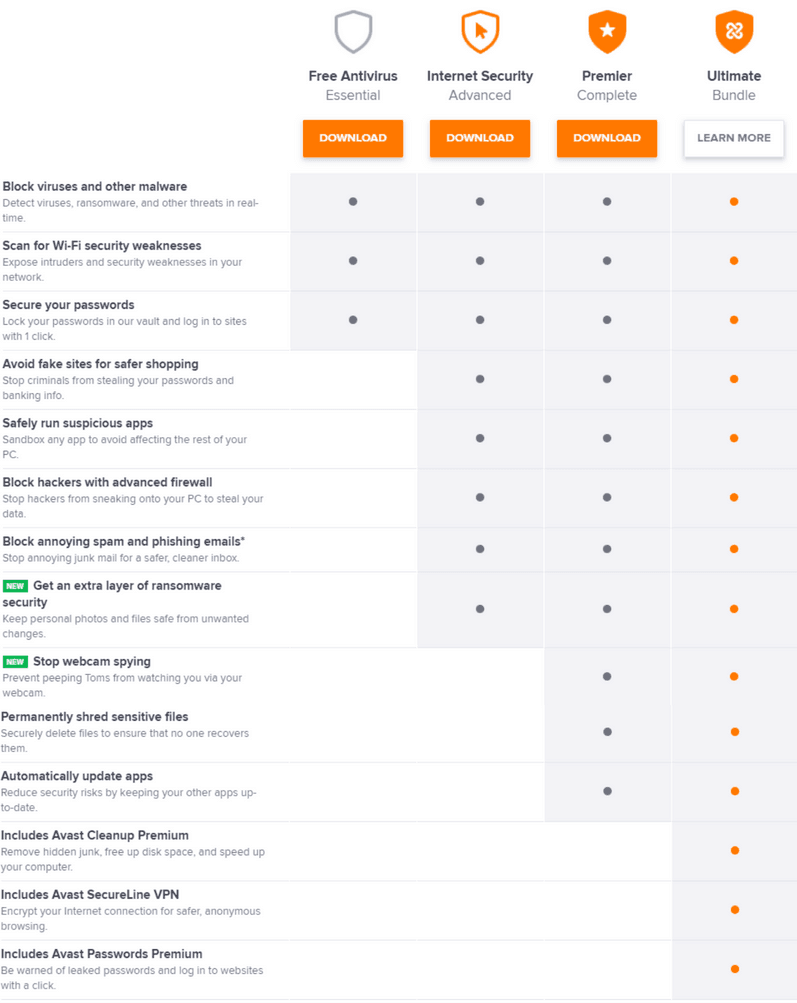 One look at the specific features in each package will point towards the obvious conclusion:

Here’s why we say this…

As mentioned in the beginning of this review, the Avast antivirus won the 2018 Product of the Year title from AV Comparatives. The 2019 edition maintains the same high standards of quality in terms of virus protection. And it is packed with machine-learning technology.

It works to protect the device and the home network, relying on a huge threat-detection network. And it shouldn’t slow down your computer significantly. With the new 2019 edition, Avast introduced on its free antivirus a new interface, easier to use and more appealing. But also, a new passive mode that allows users to run more than one security product at a time.

The game booster is not a novelty in itself. Previously called Game Mode, it was revamped into the Do Not Disturb Mode. Its blocking abilities extend to more than gaming, with watching movies or running apps in full screen included.

Yet the most notable change is the Behavior Shield, a protection mechanism that will guard your apps. So, from now on, it won’t just check the apps for malware code. It will also keep an eye on how they behave, so that you won’t have surprises from any of it. This layer adds to the previously existing ones, so that the current antivirus will include:

The latter involves sending suspicious files by default, to the cloud. It will analyze it in there and, if necessary, push a cure to all the other Avast users out there. The intelligent antivirus, cyber capture, and Wi-Fi inspection left aside, the free Avast antivirus provides Smart Scan options. With this feature, it will notify you about:

In a nutshell, this is more than just real-time anti-virus protection. And it doesn’t take much science to admit that you won’t see such an offer with many of the other antivirus software sellers on the market…

The Internet Security package works to prevent virus attacks, to protect your device, to safeguard your privacy, and to make your life as a computer user a bit easier. It is a paid version with license for one device that can be purchased for 1, 2 or 3 years. They offer a 30-day money-back guarantee and a download trial.

In terms of prevention, you have a firewall, the anti-spam feature, the Wi-Fi inspector, and protection against DNS hijacking attempts.

From the free antivirus version, it keeps the Intelligent Antivirus features, as well as the Cyber Capture, Smart Scan and Behavior Shield utilities.

The novelties? A ransomware shield and the previously mentioned Sandbox… This sandbox is where the antivirus will isolate suspicious files for safe testing and inspection. Instead of letting it run on your PC and see what it does, it securely plays with it in a controlled environment while keeping your computer safe.

Other appealing features included in this package are: 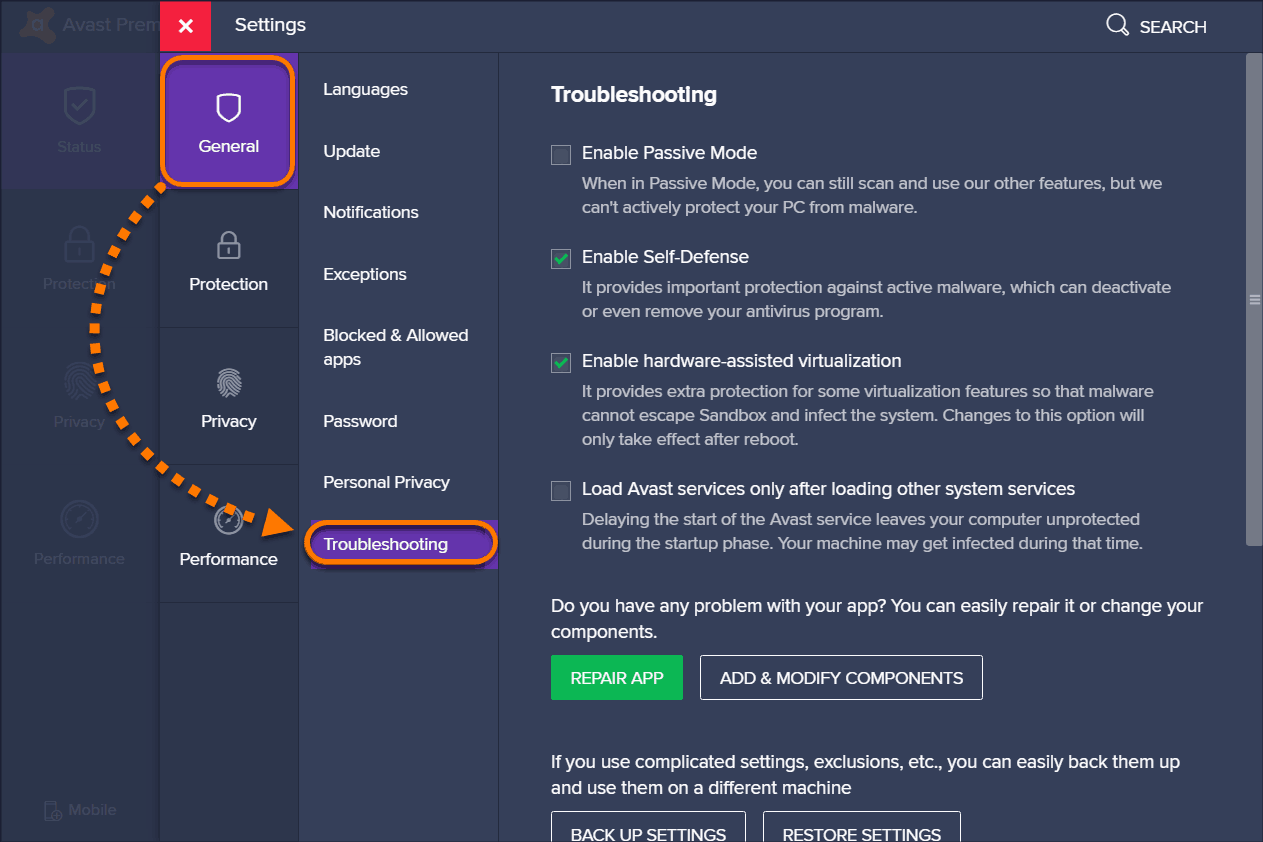 Last but not least, the Passwords tool is an addition to the standard offerings of the free package. With one master password you will be able to secure in it the passwords for all the other accounts.

As already suggested, this is where you normally start wondering if you really need all that. But what is “all that”, more exactly?

As fancy as the presentation of the Premier package may appear on the official website… If you take the main features one by one, you’ll notice that there are only three new features: the automatic software updater, the webcam shield, and the data shredder.

Everything else is pretty much the same, except for the price tag, which is significantly higher.

While we have to admit that the automatic app update can be useful, we’re not so convinced about the data shredder. The description itself is not very convincing either… It claims to overwrite meaningless data, multiple times, before deleting sensitive information, something “especially useful if you want to sell your PC”…

With this Ultimate offer, Avast is introducing its Cleanup Premium tool, the SecureLine VPN, and an enhanced version of the Passwords tool. The Passwords Premium comes with leaked password notifications.

Maximum malware and ransomware protection is ensured. As well as privacy when it comes to all kinds of banking- or just browsing- and shopping-related actions.

Long story short, the company claims to have crammed four of its individual products in one security bundle: the Premier antivirus version, the SecureLine VPN, and the two premium services Cleanup Premium and Passwords premium.

The whooping price is sweetened with a significant discount but the question remains… to pay or not to pay for Avast Ultimate when you just saw what the Internet Security Suite has to offer?

We saved the best for the last and that would be the part with the Sensitive Data Shield… This tool is actually a sensitive documents scanner available with any of the four packages, with one significant difference… The free version is only going to indicate what sensitive data you keep and where. If you want to actually be able to do something about it, you must pay. 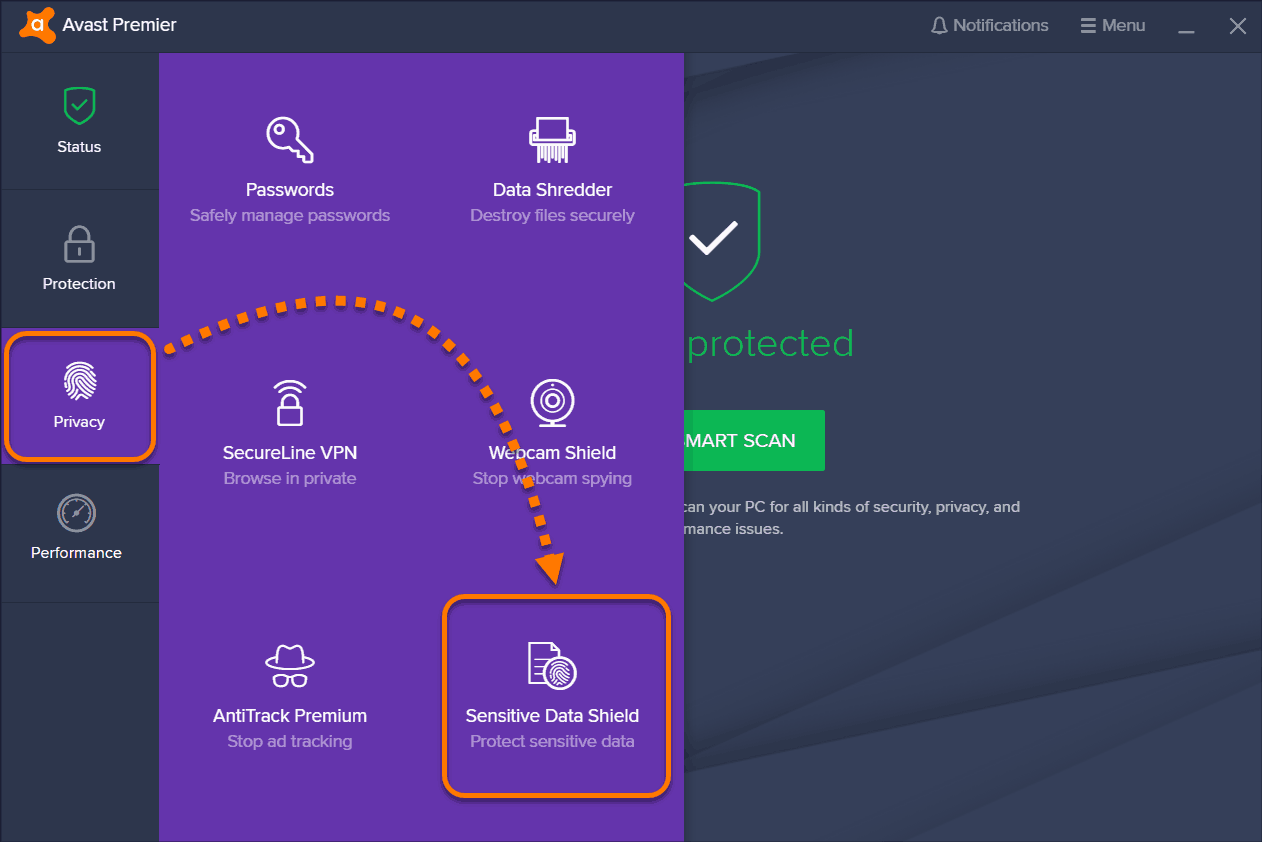 Otherwise, the feature is quite interesting as it relies on Data Loss Prevention technology. This kind of technology is normally used by large companies that handle sensitive customer data. It basically scans office documents and PDFs with optical character recognition. Whenever it detects strings of numbers and characters that resemble sensitive data, it flags it as a sensitive document.

So, the Sensitive Documents Scan browses through all your files and folders identifying all financial and personal related documents. It can spot financial statements and tax records, employment documents, payrolls, travel documents like passport or driver’s license etc.

For each file, it gives you a show location button. If you tap on it, it will indicate you where exactly on your computer you will find that document. This is very helpful as we download all kinds of personal information on our computers and more often than not, we just forget about it. Even if you might want to get rid of it later, chances are you won’t remember where you’ve stored it.

But the Sensitive Documents Scanner will tell you. And back to our initial observation, it might help you know where your sensitive data is stored… But what can you do with that information? What do you do about it if you don’t just want to delete it but rather keep it?

Well, if you are willing to pay for a subscription, you will be able to encrypt that sensitive information and keep it in a secured digital locker. Future attempts from any kind of attacker of moving or deleting those encrypted files will raise the flag. The software will block access to it and notify the user about the attack.

Looking back to the Pros & Cons…

On the plus side, we cannot help but notice that the Avast antivirus:

In the spirit of full disclosure, however, the same Avast antivirus has some flaws:

To draw a conclusion…

The basic free version is more than enough for the average home user. It comes with many features that other products don’t provide at the same level. And even in terms of performances it indicated great results. The main drawback is that it can literally drive you crazy with the upgrade notifications.

But before you upgrade, consider that the paid version goes to the extreme as it comes with lots of features that most users don’t really need. Avast tried to offer top protection and it might have overreacted with its offerings, in the sense that it overdelivers. And it doesn’t just overdeliver, but it also tends to overprice.

This makes it even more difficult to convince potential customers that they really need to pay for all that, that much. But as long as it’s free, it certainly is a top choice.