Norton Review – What’s The Catch With The Revamped Norton 360?

Norton is a name that speaks even to the least tech-savvy internet users. Even though it’s been a while since the company merged with Symantec. And despite the fact that, more recently, Norton shook hands with LifeLock, resulting into an even more complicated security solution.

As of April 2019, old-time Norton users have started to receive notifications to upgrade to Norton 360. Are you one of those who are just starting out with their research on the Norton security products? Chances are you will feel baffled to bump into Norton Security and Norton 360 packages. So many of them that it’s hard to tell which one is the one that is worth your attention.

Here’s the thing… Norton Security is the old Norton. Norton 360 is the new Norton antivirus, a series of security products that truly stand out on the market. Not just through its price tag – which is a bit hefty – but also through its standard features. While reviewing the latest offer from Symantec, we’ve come to see some unexpected features. Allow us to shed some light on it all… 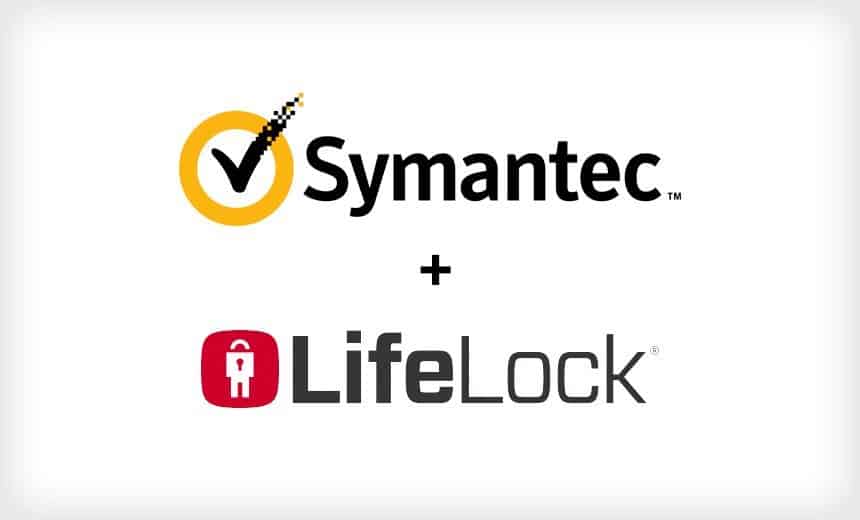 The Norton AntiVirus Basic security product was just a plain antivirus software. It worked with Windows devices only. And the subscription would have covered only one PC. Classic protection against viruses, malware, spyware, ransomware and other cyberthreats was included. And it also provided protection of personal and financial information when surfing the web.

The Norton Security Standard product was an enhanced version of the basic antivirus. It worked not only for PCs, but also for Mac and mobile devices. The protection, however, would have targeted only one device. As a novelty, it included a firewall and the 100% money-back guarantee.

The Norton Security Deluxe product was offering protection for up to 5 devices (PCs/Macs/tablets/mobiles) with only one subscription. Since it supported multiple devices, it was also offering access to a web portal for easy management. And it included a free 30-day trial.

The Norton Security Premium product didn’t just offer support for up to 10 devices. It also included parental control, automatic backups on the PC, and secure cloud storage for up to 25GB with possibility to extend for a fee. The same 30-day free trial was available for it. 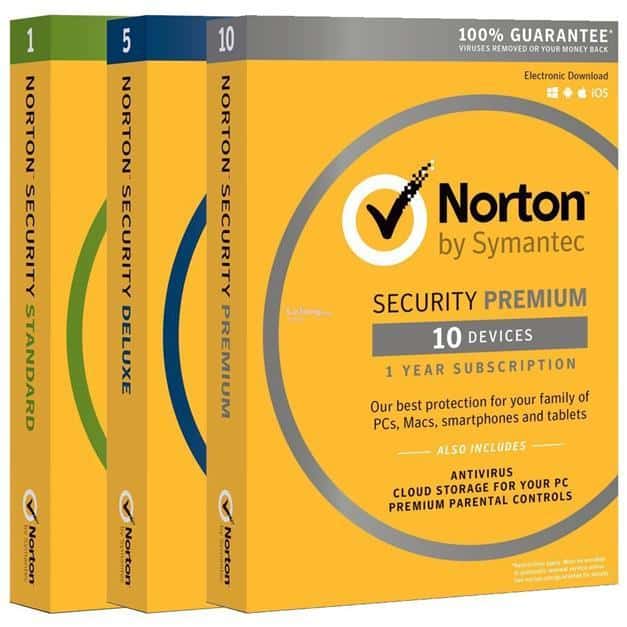 Starting with 2019, Norton revamped all of the above, switching its promotion towards the AntiVirus Plus edition and the new Norton 360. The latter is actually available as a standalone product or as a series of packages with LifeLock plans.

More specifically, the company is pushing its customers to try their 4 new security products. They claim that each of them has kept the features provided by the previous product while receiving plenty of new features.

So, instead of the four packages that we have just briefly described, buyers now have the options:

We know, it can all get confusing, with so many terms and so many features. To put it simple, we should specify that the features included by the 4 security plans can be divided between: 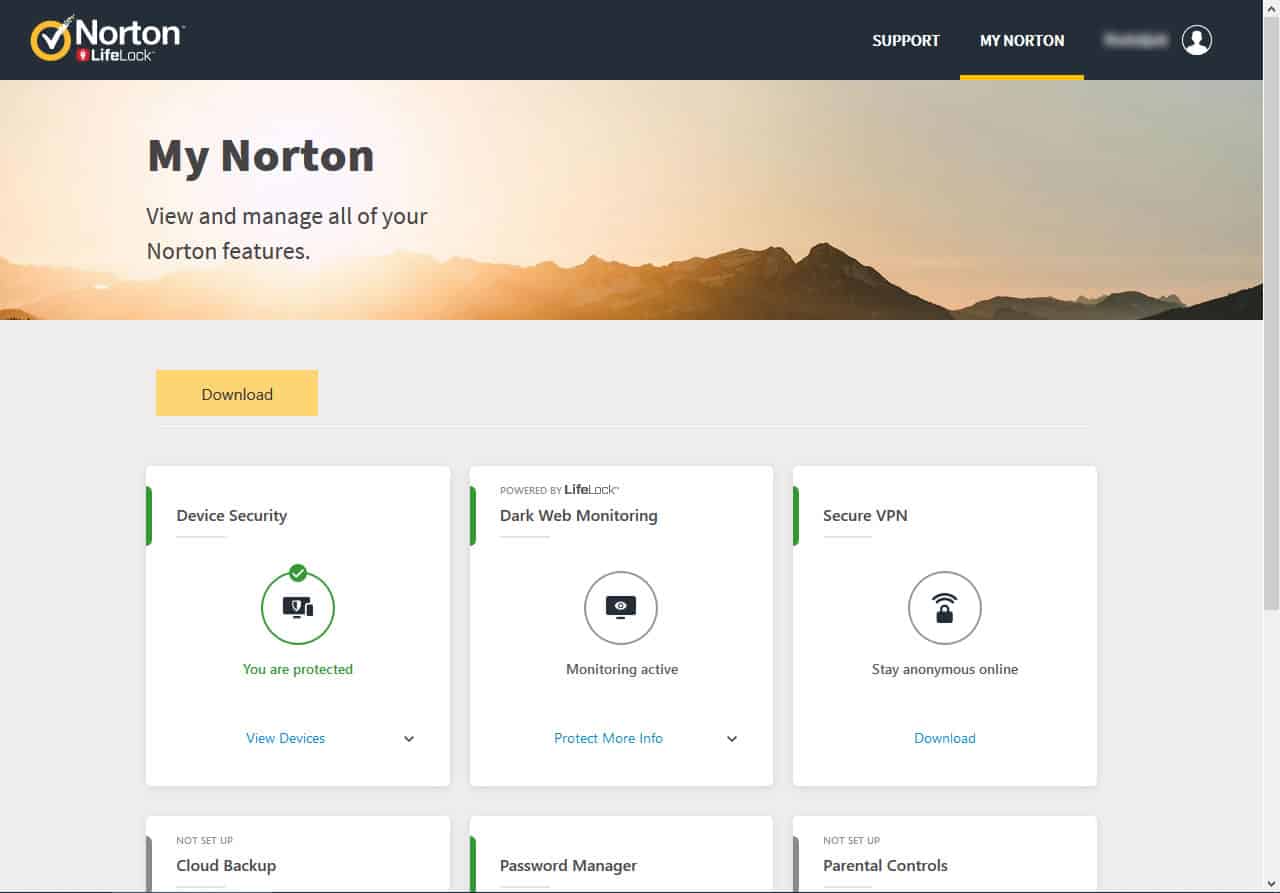 The new Norton AntiVirus Plus…

It is available not only for PCs, but also for Mac devices, though it can protect only one device per package. It promises advanced, multi-layered security. And, in addition, comes with a Password Manager tool, a smart two-way firewall, and up to 2GB of free cloud backup space. This cloud backup should work automatically and securely, protecting important files from ransomware attacks, stolen devices or just hard drive failures.

In a nutshell, the Norton AntiVirus Plus has all the device-security-related features, except for the Parental Control. It isn’t compatible with smartphones or tablets.

This package replicates the old Norton Security Standard product. This means that it is kind of in the same boat with the AntiVirus Plus…

It is kind of a Norton 360 Standard replica multiplied by 5. In other words, it has all the features above-mentioned but it can protect up to 5 devices. It also ensures secure VPN for up to 5 devices. And instead of 10GB cloud storage, it comes with 50GB.

The new Norton 360 with LifeLock plans…

This is an all-in-one security suite that doesn’t just protect the device, but also the user. It ticks all the boxes in all categories: device security, online privacy, and identity theft protection. And it can offer protection for up to 5 devices, be it PCs, Macs, tablets or smartphones.

Completely new from all the other 3 packages, it brings to the table: 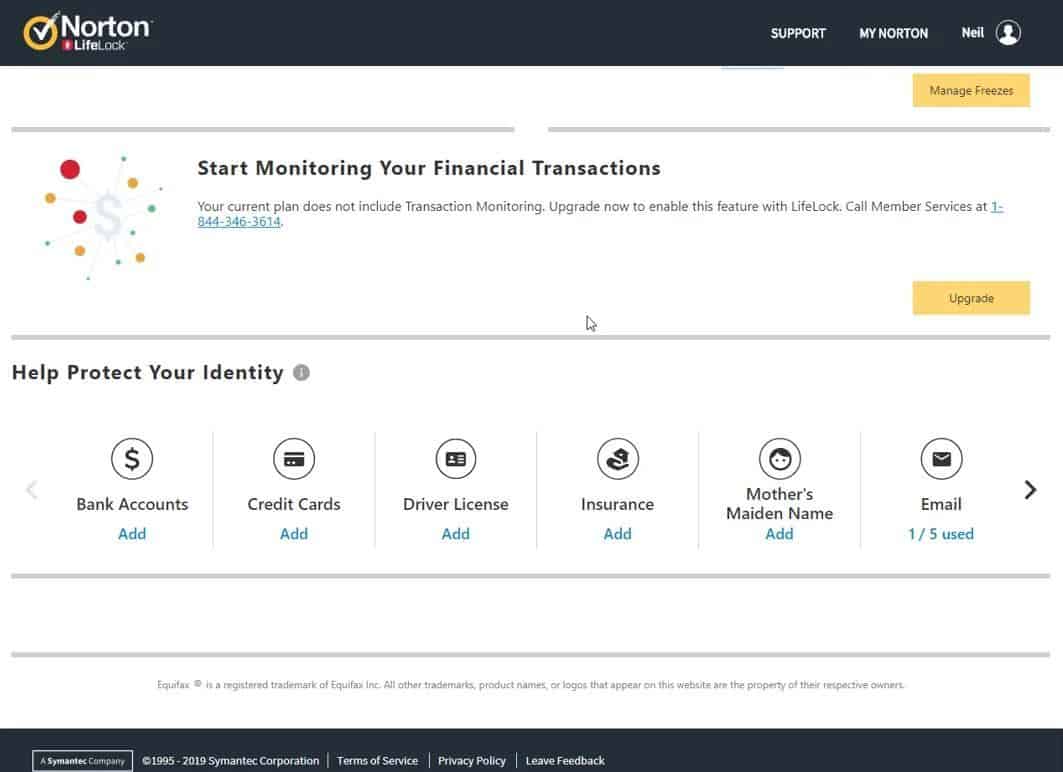 Still, how does it actually protect your devices?

These days, any antivirus will promise you anti-virus and anti-spyware tools, as well as protection against malware or ransomware attacks. Yet the tools it relies on, in the process, are actually the ones to make a difference in the competitive world of cybersecurity products. How does the new Norton 360 step aside from its competitors?

For starters, it promises a multi-layered malware protection. Single-layer protection is so like yesterday… To cut to the chase, Norton claims that its security products rely on artificial intelligence and machine learning technologies. And that there are 6 different directions from where it monitors and fights potential threats.

Then, Norton also makes the promise of a 100% guarantee that viruses will be removed OR you get your money back. This is not the kind of I-don’t-like-it-please-refund-me kind of money-back guarantee. They say that IF your device gets a virus, one of the Norton experts will remotely access your device and eliminate it.

Only failing in doing so will entitle the customer to getting back the money. The catch, however, is that for a customer to be eligible for this kind of refund, he or she must have previously activated the automatic license renewal.

What about those 6 layers of protection?

What’s with the LifeLock plans?

Norton is one of the oldest companies in the field of antivirus and consumer cybersecurity. Nevertheless, it no longer exists independently since 1991, when it was acquired by Symantec. Starting with 2017, Symantec also acquired LifeLock, which is one of the most popular brands in identity theft protection. Norton LifeLock is now the duo that fights cybercrimes and protects users’ identity in both online and offline.

One key feature of identity theft protection is the monitoring of the Dark Web. You’re a Norton customer and you have purchased a plan that includes Dark Web monitoring? LifeLock will have your back, scanning for details such as: name and driver’s license, bank accounts and credit cards, phone numbers or addresses, even mother’s maiden name etc.

If it finds anything about you in there, it will notify you via SMS, email, or on the dedicated mobile app. In the unfortunate event that you become a victim of identity theft they will take care of you. An U.S.-based identity restoration specialist will personally assist you in solving the situation.

LifeLock is, however, not only reactive, but also proactive in its assistance. That’s what the Lost Wallet feature is for. They assume that a lost wallet is only a few steps away from a lost identity. If you happen to lose your wallet, you can ask their help to replace/cancel important documents, from Social Security cards to insurance or credit cards etc.

As for the Million Dollar Protection package… It works as an insurance that, in case of identity theft, you will be covered for all the necessary expenses. This insurance would cover not only your personal expenses, but also the ones with experts or lawyers that might have to assist you.

In a nutshell, there are 3 plans to choose from, as part of the Norton 360 with LifeLock suite: Select, Advantage, and Ultimate Plus. Most differences are given by the amounts covered in the Million Dollar Protection Package. And of the presence or absence of several very specific identity protection features: bank activity alerts, fictitious identity monitoring and even court records scanning or 401k and investment activity alerts. 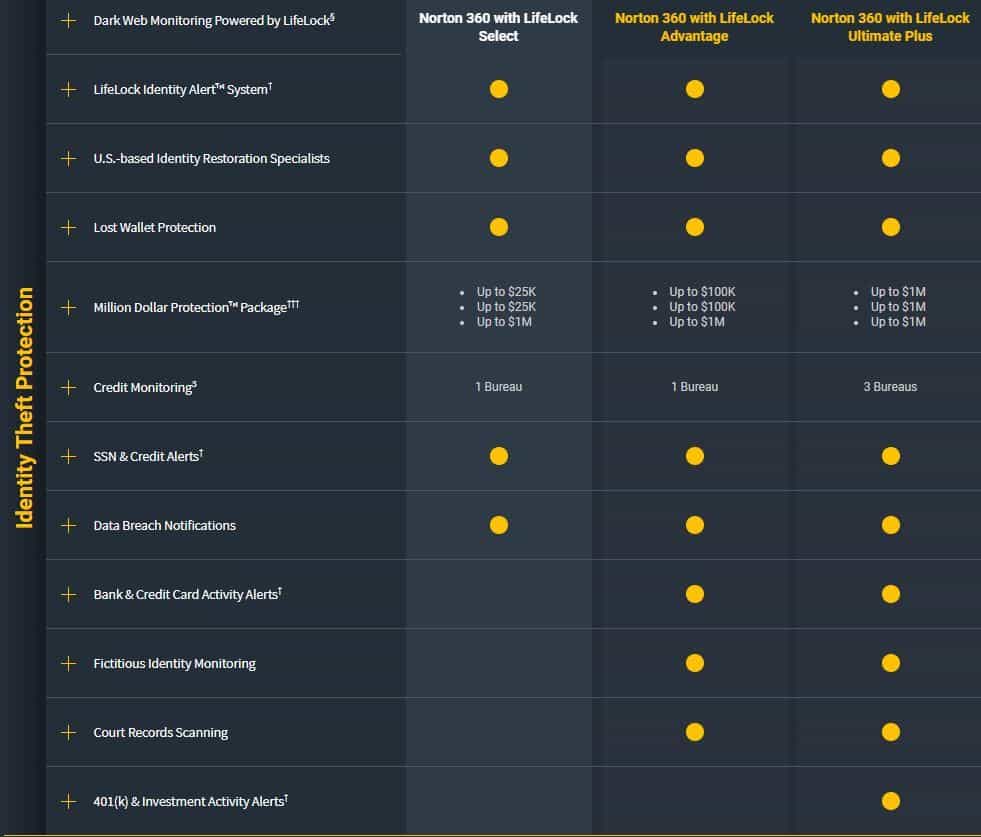 A few words on the negatives and limitations we spotted:

The advantages that derive from every single Norton antivirus package are pretty clear by now. Some of the negatives and limitations that come with it, however, aren’t.

So, before deciding which suite is right for you, we recommend that you carefully read the product descriptions on the official website. And that you particularly pay attention to those tiny asterisks next to certain features….

For now, we should underline that:

So, the catch with the revamped Norton 360…

All the Norton antivirus products were offering (and continue to do so) protection against: viruses, malware, spam, phishing attacks, malicious email attachments and more. There’s also an impressive number of scanning options. And evidence that the antivirus will go easy on your system resources.

The two-way firewall and the password manager, on the other hand, are advanced features that Norton chose to introduce with more basic packages. There’s exploit protection even in the basic antivirus. Even the online backup option has become a common, not a top-tier package specific feature. And through it all, there’s the famous Insight technology that offers crowdsourced download protection.

Those who roam around not knowing from where to purchase a Password Manager app, an Online Backup service, or a VPN service… Let’s just say that they’ll be thrilled to discover the new Norton 360 security bundles. Average users, on the other hand, those who don’t necessarily need a security suite, might find the standard antivirus a bit too pricey. Not for what it offers, but rather because it offers features that they won’t really appreciate.

These, of course, won’t make the new Norton 2019 antivirus offers less valuable. But it will certainly make potential buyers think harder on if or which of the many packages to choose. Other than that, Norton continues to stay on top of the market with sound protection and encouraging customer support.